about the wobbly goat race krewe

I started running, rather uncompetitively, in 2017, though I took my first foot-dragging steps in 2016 with even less seriousness.  Over the course of many trots through the woods and having my soul drained doing road races, I try to let my mind wander in an attempt to keep me from thinking how much I despise running: as soon as I start, the only thing I want to do is stop.  So why do I keep doing this to myself?  See the bottom of my RoadID®. 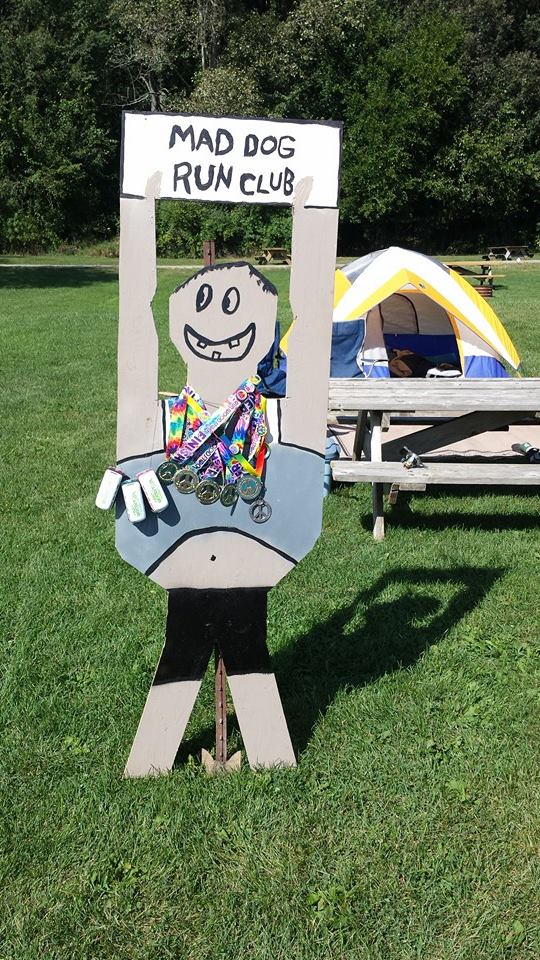 To get back to the main point, I would try to think of ways to make trotting more interesting, or at least suck just a little less.  A major bit of inspiration came in the form ofMad Dog Running Club somewhere south of me.  I probably don’t have the name quite right, but anyone who has done a trail run sponsored by Running Fit has likely comes across this “club,” which boasts a membership of one: a grizzled fugitive from the ‘60s with long straight grey  hair, bandana, and knee-high two-stripe tube socks reminiscent of Artimus Pyle (see Lynyrd Skynyrd’s Street Survivors – he’s the vegetarian).  Mad Dog doesn’t care if he is the only one in his club, and, from what I have seen, may kinda’ prefer it that way.  I am assuredly drawn to this level of devil-may-care attitude.

There are running clubs all over the place and they are all filled with beautiful people who have a love for athleticism that I simply lack.  From what I’ve seen, all of them have a basis in people wanting to do well by being fast in general, or have incredible tenacity in going for obscene amounts of miles, or working to improve their personal bests.  All of that is wonderful and outside my bailiwick.  This is not to say that these groups I’ve run with, or belong to, are difficult people; to the last, every person I’ve talked with, even for only a few minutes, in these races have been encouraging, supportive, enthusiastic, a little touched in the head, and lovely overall.  They almost make me wish I didn’t have such distaste for trotting about.  The fact remains, though, that I am not so much interested in my time as I am in finishing and getting the torture over as soon as I am able.

Coupling these thoughts, the Wobbly Goat Race Krewe was born.  Admittedly, the “Race” part is sarcasm.  Races morph into events or activities: something to suffer through for a period of time so that pants will fit better or stairs will stop kicking my ass.  If other people wish to join, that would be lovely; if no others, then an army of one is still enough to amuse me.

The Logo and Name

The goat was drawn by young artist Jadyn Gould.  She had little more to go on than my vague scratches on scrap paper that barely rose above the level of a stick figure.  From there she came up with a most excellent, slightly tipsy ungulate with crooked horns and a bit of a paunch.  The layout was done up by Jennifer Ayers (also the webmistress of this site); with a great deal of patience, she came up with multiple designs, catering to my being such a fussbudget.

The name, of course, came from running with the cool kids.  In running Mt. Bohemia, a ski place that has no discernable trails but plenty of gigantic boulders and densely populated, randomly placed trees to break the bodies of lunatic skiers, a couple of ladies who let me run with them liked to remark about my willingness to take on hills.  Going down them, I heard something like “he’s a like a 12-year old skipping merrily along and I’m just waiting for him to faceplant one of these times.”  Going up was a little more visceral: “fucking mountain goat walking up these cliffs as if they were nothing…”.  I have one speed (mosey) other than stop; terrain doesn’t seem to do much to alter that pace.  As for the wobbly part, I will never forget the feeling after my first 50k.  And how good it felt to pound the beer afterwards, exacerbating the unsteady feeling on my feet.

Krewe gives the impression of an informal family.  It also breaks the stranglehold other nouns, like club or team, have on stuff like this.


To view a list of our current members, please visit "our tribe."